When Christmas draws near, and it’s cold and soggy outside, there’s nothing more fun than popping in a DVD or firing up Netflix and watching a Christmas movie together. But it’s easy to get tired of the old standards – Miracle on 34th Street and It’s a Wonderful Life seem like they are always on cable, and then there’s that 24-hour marathon of A Christmas Story that keeps drawing you in on Christmas Eve. 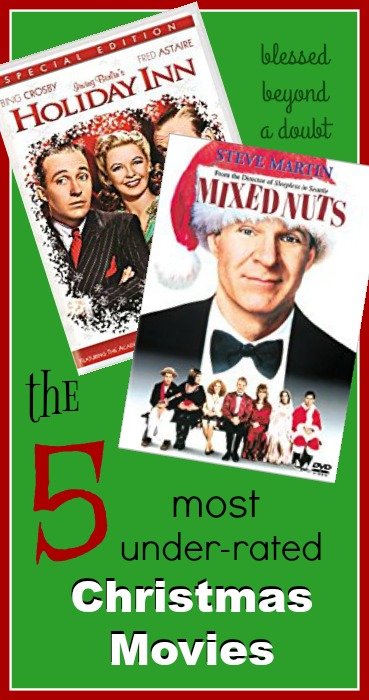 But if you limit yourself to these, then you’re going to end up missing out on a treasure trove of films that celebrate “the most wonderful time of the year” – so check out this list of movies that offer plenty of their own holiday cheer.

The 5 Most Underrated Christmas Movies

Let’s face it – you can’t get through the holiday season without a trip down Charles Dickens’ classic tale of redemption. There are many different renditions of this classic, beginning way back with with Alastair Sim’s interpretation of Scrooge, as well as Jim Carrey’s digitized version that Disney put out. But if you like the idea of Jean-Luc Picard showing up in Victorian England, you’ll be delighted with the understated sarcasm that Stewart brings to the role. Richard E. Grant (Bram Stoker’s Dracula, Corpse Bride and L.A. Story, among others) shows up as a stellar Bob Cratchit as well, playing the downtrodden clerk with an emotional whimsy.

If you’ve never seen the scene of Clark Griswold riding his magical metal sled for what looks like miles through town, that’s worth a stop-down alone. But this third installment of the National Lampoon’s Vacation series might be the best of the bunch, as the Griswold family has two sets of in-laws, a crazy aunt and uncle and a redneck cousin (Randy Quaid), none of whom has the holiday spirit. Murphy’s Law governs this home – and all Clark wants to do is help his family have a good time. Plenty of laughs ensue!

What happens on Christmas Eve if you work at a suicide hotline? The movie begins with Santa Claus, a Christmas tree and a bunch of bicycles all running into each other. Steve Martin plays the director of the center, which appears to be staffed by a collection of people just as eccentric as the callers. One staffer (Rita Wilson) either gives awful advice or accidentally hangs up on them. In the backdrop are the killings are the Seaside Strangler, a serial killer, and we see the comedy that happens when all of these people are dropped into the same set together.

So you have Iris (Kate Winslet) who is in love with Jasper (Rufus Sewell), but he doesn’t know it. Then we have Amanda (Cameron Diaz) who is just ready for a sea change. The two women swap homes for the holidays. There are all kinds of romantic hijinks, as Amanda meets Jasper and Iris meets Jack Black’s charmingly cynical character. If you’re looking for a romantic holiday movie that everyone hasn’t already seen, this is a solid choice.

Back before he was the Governor of California, but after he made those first two Terminator movies, Arnold Schwarzenegger went through a phase where he alternated between action movies and comedies. This gave us the forgettable Kindergarten Cop, but it also gave us this terrific story, in which Schwarzenegger plays a workaholic dad who neglects his family – until Christmas Eve, when he realizes he promised to get his son a TurboMan doll. Naturally, the toys stores are sold out, but he is determined, so he battles an angry postman (Sinbad) in a chase for the toy. The late Phil Hartman plays a lecherous single-dad neighbor who has used home-improvement and baking skills to become the Lothario of the block, and the great Robert Conrad turns up in a cameo as a police officer who Howard (Schwarzenegger) keeps running into – literally. Laughs ensue from start to finish.

Which one of the The 5 Most Underrated Christmas Movies will you watch first?