Preschool Packs are one of my favorite printables to create, especially when I can give them a fun theme. When I was homeschooling my boys, my daughter loved to do school with them. She always got excited when I would pull out a new preschool pack for her to work on.

Every May, Cinco de Mayo is celebrated around our neck of the woods. It’s a fun day to learn about Mexico and to learn what Cinco de Mayo really means. 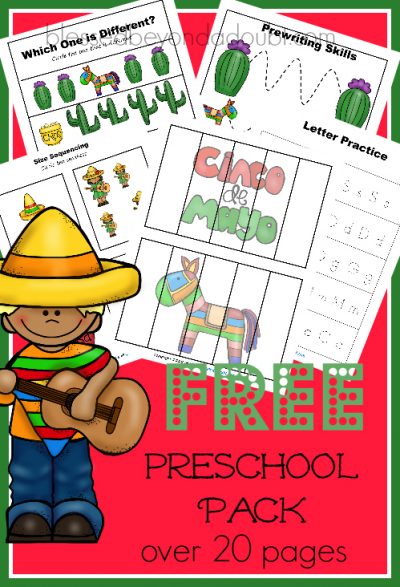 Most people think that Cinco de Mayo is the celebration of Mexico’s Independence Day. In fact, it is not! The Mexican Independence Day is actually on September 16th, which commemorates Mexico’s declaration of independence from Spain in 1810.

Cinco de Mayo is a Mexican holiday celebrating the Mexican Army’s victory over the French in the Battle of Puebla during the Franco-Mexican War. In Mexico, Cinco de Mayo is actually a minor holiday. However, over the past several decades, in the United States, it has become a celebration of Mexican heritage and culture.

In 1861, Benito Juárez, a lawyer and member of the Zapotec tribe, was elected the Mexican President. At the time, Mexico was in major debt to France, Britain, and Spain, who sent their naval forces to Veracruz, Mexico, demanding repayment. Britain and Spain settled with Mexico, but Napoleon III of France chose to use the opportunity to take over parts of Mexico.

On May 5, 1862, the Battle of Puebla took place from daybreak to early evening. During the battle, 6,000 French troops attacked Puebla de Los Angeles, a small town in east-central Mexico. Benito Juárez was able to round up 2,000 loyal men to face the French attack. The ragtag loyal Mexican forces managed to pull off a victory of the Mexicans losing only 100 men, while the French lost 500 soldiers before retreating.

Though this battle did not win the war for Mexico, it rallied the troops and bolstered the resistance movement to continue to defend the Mexican homeland. With the aid of the United States, Mexico managed to force France to withdraw its forces in 1867.

It was always convenient to have springy printables for my princess to keep her busy while I homeschooled the older children. I had so much fun creating these Cinco de Mayo theme activities. The Cinco de Mayo Preschool Pack is filled with festivities and bold, vibrant colors.

I created this Cinco de Mayo preschool printable pack for my email subscribers.

Just fill out the form below and you will receive instantly the PDF via email. Please check your spam folder.

Please copy and paste the link from your email into a new tab on your browser.

I post several FREEbies weekly, so you will always have something new for your children.

Thank you for visiting Blessed Beyond a Doubt and pinning this festive printable pack on pinterest.