This month’s Teachable Timeline takes a closer look at 1775. If you take a look at American history, you’ll find one event fills the headlines of the year—the American Revolution. On April 18, 1775, Paul Revere made his famous ride to warn the colonists of the British plans to seize the colonist’s military supplies in Concord. On April 19, 1775, the “shot heard round the world” was fired at Lexington. The American Revolution had begun. Here is some copywork from the famous Henry Wadsworth Longfellow poem “Paul Revere’s Ride.” 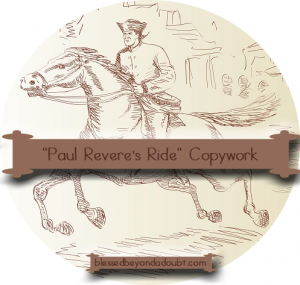 There are many other fun ways to bring the time of the American Revolution to life for your kids, too!

You can also make Revolutionary War paper hats. Use a parent-approved step stool to climb on and two flashlights or battery powered lanterns to act out the poem and send the signal!

If you take a look at a historical timeline, you can find all sorts of other important events that also happened in 1775. Some were related to the forming of a new nation while others were the birth of men and women who would one day become known as scientists and authors. Inventions were created and discoveries were made. Let’s explore 1775 with this round up of history activities.

The French physicist André Ampère is born in Lyon, France. He is remembered for establishing the field of science now known as electromagnetism. The ampere, the unit used for measuring electric current, is named after him. With a parent’s supervision, older students can have fun with these electromagnetism experiments.

Explorer James Cook returns from his second voyage. Discover New Caledonia, as James Cook did, with these images on UNESCO’s World Heritage website. (Parents: please use caution when exploring other resources on this page, as some deal heavily with indigenous beliefs of the people of New Caledonia.)

The Second Continental Congress establishes the postal system; Benjamin Franklin becomes the first Postmaster General. Have some fun with some post office and stamp collecting-themed activities.